Difference between revisions of "CMS/DredgeModule"

In 2013, work began development of a dredging module for the Coastal Modeling System through Reed & Reed Consulting. This document references some of their descriptions and initial findings.

Dredging of federal navigation channels is one of the primary missions of USACE. The Coastal Inlets Research Program (CIRP) has determined the need to implement a dredging module within the Coastal Modeling System (CMS). This module will greatly enhance the capability of the model to support the USACE districts in their planning efforts.

A FORTRAN code module has been developed in the CMS to simulate dredge activities, herein referred to as the Dredge Module. The Dredge Module encompasses the specifications of dredging areas, dredge disposal sites and operational rules governing the dredging. The module is based on the dredge module currently documented in the Delft3D-Flow User’s Manual dated September 2010 and provides the same simulation capabilities. The module has been developed using the current CMS-Flow code structure with a single file containing a variable definition (FORTRAN Module), card reading routine, initialization routine and routines necessary to implement the dredge simulations. The Dredge Module provides specific output to record the dredging rates and volumes occurring during the simulation. The Dredge Module has been implemented and tested in both the explicit and implicit solvers. The Dredge Module was designed so that it can be implemented in the current SMS 11.1+ version without GUI modifications. The module will make use of the existing advanced card capabilities and the data set creation capabilities for specifying dredge source and dredge placement areas. The module was developed in two phases. First, to accommodate single grain size simulations and, second, to extend the dredge module for use with multiple sediment grain sizes.

A dredging module interface has been developed for SMS version 13.0 and some modifications to the initial CMS Dredge Module code were made to accomodate the new interfact, but is backward compatible to the initial CMS file inputs and data files.

The dredge module is implemented in the CMS as a subroutine call from the explicit or implicit flow solver routines. The dredge simulation's primary interaction with the CMS is a modification of the morphology by adjusting the bottom elevation of cells that are in the user defined dredge areas or placement areas. When certain criteria are met, the bottom elevations of cells in the dredge area are lowered to simulate the removal of sediment and the bottom elevations of cells in the placement areas are increased to simulate the placement of the dredge material. A mass balance is maintained and it is also possible to represent conditions in which the dredge material is placed in upland areas or in areas not represented in the CMS grid domain. The simulation can also be configured to simulate the construction of dredge placement islands.

There are presently four options for triggering dredging for a given scenario.

Order of Dredging within Dredge Area

The options of dredging define the order in which cells are dredged to the specified dredge depth:

There are two options for dredge material placement during each interval.

In Phase 1, A total of eight dredge simulations were developed and executed to test the various dredge simulation options. The basic test template consists of a rectangular grid domain with a typical offshore profile increasing in depth from north to south. Two dredge scenarios were defined and were named "CapitolDredge" and "MaintDredge" respectively. 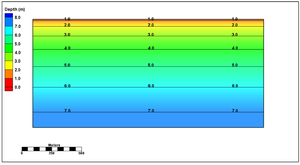 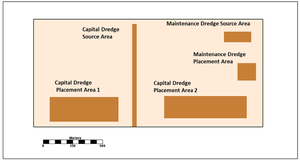 The first dredge area, "CapitolDredge" consists of a dredge source area aligned to represent a navigation channel (north-south alignment). The dredge depth was set to 7.5 meters, which created a total dredge volume of approximately 153,000 m3. The dredge rate was set to 5000 m3/day, which yielded a total time of 30 days to complete dredging. Two placement areas were defined; both near the southern edge of the grid domain, one to each side of the channel.

The second dredge area, "MaintDredge" consisted of a dredge area in the northeast corner of the grid domain and resembles a sediment impoundment basin. The dredge depth was set to 8 meters yielding a dredge volume of 130,000 m3. The dredging rate was set to 6000 m3/day, yielding a dredge time of 22 days. A single placement area was defined to the south of the dredge source area.

Examples of the simulated dredging activities for Test 101 are shown in Figure 5 through Figure 8. Figure 5 shows the final morphology changes due to the simulated dredging activities. The CapitolDredge navigation channel is apparent, as is the placement in Area 1. The capacity of Placement Area 1 was not exceeded, so the second area was not used. The changes in morphology for the MaintDredge scenario are also evident in the figure.

Figure 6 shows the morphological evolution for the CapitolDredge scenario along a transect aligned with the navigation channel. The dredging begins at the specified starting location at the north end of the channel and proceeds southward. The evolution for the MaintDredge scenario is shown in Figure 7 along a north-south transect passing through both the dredge source and placement areas. The dredging for the source area starts at the northern end, which is the shallowest, but quickly proceeds uniformly over the dredge source area as all cells obtain an equal depth. The placement of the material builds up uniformly over the placement area until the specified placement depth limit (3.5 m) is reached in the shallower portion of the profile. At this time, more material is placed in the deeper areas.

Sample results from Test 102 are shown in Figures 9 and 10. In this test case, the dredge option for the CapitolDredge scenario was changed to number 1, which causes the dredging to start at the shallowest cell. The dredge profile evolution along the navigation channel is shown in Figure 9. The dredging starts at the northern shallowest end of the source area, and progress downward, extending further offshore as the depth increases. This profile contrasts the profile obtained with dredge option 2, shown in Figure 6.

Sample results from Test Simulation 103 are shown in Figure 11 and Figure 12. In this test case, the placement allocation between the two placement areas was changed from 100% and 0% to 60% and 40%. Figure 5 shows the final morphology changes due to the simulated dredging activities. The dredge material form the CaptiolDredge source area is distributed over both placement areas. These results are in contrast to the results obtained with the 100%/0% split shown in Figure 5.

In Test Simulation 104, the dredge placement approach for the CapitolDredge scenario was changed from option 1 to option 2, which places material in the cells closest to the designated starting point first. The starting location is the northwest corner for placement area 1 and is at the northeast corner of placement area 2. The final morphology changes are shown in Figure 13. The placement areas are filled according to the specified allocation of 60% and 40%, but the filling starts at the cells closest to the designated starting locations, and are filled to the specified placement limit of 3 meters for area 1 and 3.5 meters for area 2.

The final example provided is for Test Simulation 108, in which the CapitolDredge and MaintDredge scenarios triggering option was set to number 4. For the MaintDredge scenario, two dredge periods were specified: one from 50 to 300 hours and another from 350 to 600 hours. The time series of dredged and placed volumes for Test 108 is shown in Figure 16. The remaining dredge volume decreases steadily during the two designated periods, and remains constant during the 50 hour break between the two dredging periods. The MaintDredge Placement area is filled after 220 hours of dredging (equal to 270 hours of simulation time), at which time the remaining dredged is assumed to be placed in an area off of the CMS grid domain and that volume is recorded. Between 200 and 350 hours, dredging has ceased and the dredged and placed volumes remain constant. After hour 350, dredging continues and the material is placed off the CMS grid domain.

As seen previously in Test 101 (See Figure 8), the time to dredge the entire source area at 6000 m3/day is approximately 528 hours. Since the allocated dredge time for Test 108 is 500 hours, the source area volume of 130,000 m3 is not completely removed. The dredge volume is limited to 125,000 m3 due to the specified dredging periods and dredge rate.