Difference between revisions of "Publications:CIRP-WN-17-1"

by Chris Reed and Alejandro Sanchez

This Coastal and Hydraulics Engineering Technical Note (CHETN) describes the implementation of a dredging module (DM) within the U.S. Army Corps of Engineers (USACE) Coastal Modeling System (CMS). The DM simulates one or more dredging operations during a CMS simulation and provides options for the dredging and placement of material. The DM may be used in studies such as estimating future dredging requirements, evaluating alternative dredging operations, and analyzing morphologic consequences of dredging operations. A coastal application at St. Marys Entrance Channel, FL, is provided to illustrate the setup procedure and demonstrate the model capability.

A pdf version of this document is available at the Defense Technical Information Center.

The CMS, developed by the Coastal Inlets Research Program (CIRP), is an integrated suite of numerical models for simulating water surface elevation, current, waves, sediment transport, and morphology change in coastal and inlet applications. It consists of a hydrodynamic and sediment transport model, CMS-Flow, and a spectral wave model, CMS-Wave (Buttolph et al. 2006; Sánchez et al. 2011a, b; and Lin et al. 2008). The CMS is interfaced through the Surface-water Modeling System (SMS).

Dredging is one of the primary missions of USACE. Several hundred million cubic yards of sediment are dredged annually from U.S. ports, harbors, and navigation channels to maintain and improve the Nation's navigation system for commercial, national defense, and recreational purposes (USACE 2010). Dredging operations can have a significant impact on coastal morphological evolution (Stark 2012). Hence, the simulation of the coastal morphological features should also include dredging activities. In the past, dredging activities have been incorporated into CMS modeling studies by (1) interrupting the CMS simulation and modifying the bathymetry according to dredging activities and re-initializing the simulation (Beck and Legault 2012) or (2) limiting the simulation period to be within the dredging cycles (Sánchez and Wu 2011). To accurately simulate long-term coastal morphology change extending over multiple dredging cycles, a DM has been developed and implemented in the CMS. The module directly simulates dredging operations by removing and adding sediment to user-specified dredge and placement areas.

The DM simulates the dredging and placement of material by simply adjusting the bed elevations of user-defined dredge and placement areas on the CMS-Flow grid. In the present version, the DM assumes a uniform bed composition and therefore is only recommended to be used with a single sediment size class. This limitation will be addressed in the subsequent version of the DM. There are multiple options for controlling how a dredging event is triggered, how the material is dredged, and how the material is placed. If CMS-Flow is coupled to CMS-Wave, the updated bathymetry is passed to the CMS-Wave grid at each steering interval. The DM is coupled to the hydrodynamics, waves, and sediment transport through the bed elevations. The dredging simulation can also be configured to simulate the construction of islands created through placement of dredged sediment. It is also possible to represent conditions in which the dredged sediment is placed in upland areas or in areas not represented in the CMS grid domain. A verification of the DM is presented in Reed & Reed (2014) for eight idealized test simulations to ensure correctness of input and output as well as mass conservation. The DM is not intended to simulate the details of the dredging operation since it does not simulate processes such as the suspension of sediments during dredging, hopper dredging overflow, sediment dispersal during placement, etc. The primary purpose of the DM is to represent the morphologic changes due to dredging operations and estimate future dredging requirements in response to system modifications or changes in the environmental forcing.

For each dredge area, the following must be defined:

The four options for triggering dredging for a scenario are the following:

The following must be defined in each placement area:

There are two methods for specifying the placement limit for each placement area:

Both options can be defined for specifying the placement limit. In that case, the more limiting condition will be used.

There are two options for determining where to start the material placement:

The CMS flow and wave models were configured to simulate dredging activities in the St. Marys Entrance Channel (i.e., the offshore portion of the channel). Bathymetry data were obtained from NOAA’s National Geophysical Data Center (NGDC) web site (NGDC 2014) for St. Marys Entrance, the adjacent offshore area, and in Cumberland Sound. A telescoping grid was constructed with variable grid cells ranging from 50 to 500 m (1640 ft) (Figure 1). A color contour map of the bathymetry is also shown in Figure 2, and the entrance channel is visible in the figure. The channel depths were set to 15.5 m (51 ft) at the beginning of the simulation.

A 1-year simulation for 2008 was used for the example. The model was forced with tide constituent data using the tidal consistent database available via SMS. Wind data were obtained from the NOAA meteorological station at Fernandina Beach (Station 8720030) (NDBC 2014). A CMS wave model was also configured for the same domain as the flow grid using constant 200 m grid spacing. Wave data from Wave Information Study (WIS) station 63401 (WIS 2014) were used for input to the wave model. 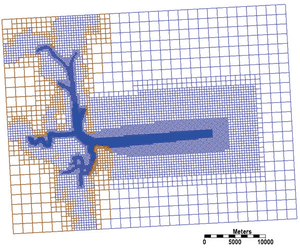 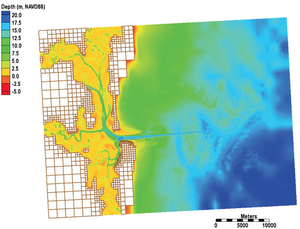 The flow and wave models were run using the implicit temporal scheme with the inline steering (coupling between flow and waves) option with a hydrodynamic time-step of 10 minutes (min), and a steering interval of 1 hour (hr). The DM was configured to simulate dredging of the outer channel. The dredging and the placement areas are shown in Figure 3. 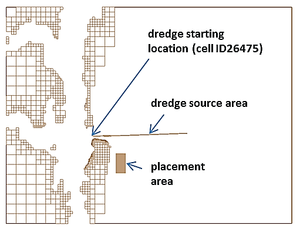 Figure 3. Dredge and placement areas and the dredge starting location.

The advanced cards used to activate the DM are listed in the example below:

The file containing the identification of cells in the dredged and placement areas is “DredgeAreas.h5” with paths “Datasets/DredgeArea” and “Datasets/PlacementArea.” The dredge depth was set to 15.5 m (51 ft), and the triggering approach was set to the DEPTH method with a depth of 14.0 m (46 ft). The dredging rate was 20,000 cubic meters/day (m3/day) (26,159 yd3/day). The dredging started at the river entrance (cell ID 26475) and proceeded offshore. There was a single placement area. Dredged material was placed uniformly in each cell in the placement area and continued for each cell until the prescribed depth limit of 3.0 m (9.84 ft) was reached. A time-series plot of the dredging activities is shown in Figure 4. The relative offshore wave height during the simulation is shown in grey. The maximum height was 5 m (16.4 ft), and the sudden increase in the channel sediment volumes correlates well with the large wave events. The black dashed line (volume in channel) represents the sediment volume that is above the specified dredge depth in the entire dredge source area. The red line (volume ahead of dredge) is the sediment volume that has not been dredged yet in the section of the channel. For the first 33 days, these volumes are identical because dredging has not started. At day 33, the depth in the channel goes below the triggering depth of 14.0 m (45.93 ft) and dredging begins. The volume ahead of the dredge is the volume remaining to be dredged and decreases as the dredge progresses through the source area. The total volume in the dredge area also decreases but at a slower rate since sedimentation continues in the areas of the channel already dredged (i.e., behind the dredge). The sediment volumes occasionally increase in response to large wave events. The dredge reaches the end of the source area on day 93, when the sediment volume ahead of the dredge is reset to the same value as the total volume in the channel. At this point, the total dredged volume is approximately 1,150,000 yd3 (879,238 m3). However, since sedimentation has been occurring behind the dredge, the triggering criteria of 14 m depth is exceeded only 1 week later, and the dredging cycle starts again. 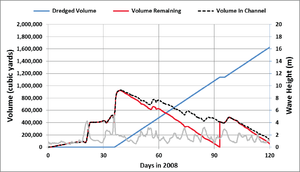 Figure 4. Volume of sediment in channel and cumulative dredged as a function of time, St. Marys Entrance.

A DM has been developed and implemented in the CMS. The module significantly enhances the capability of the model to support the USACE dredging operations at navigation channels by directly simulating dredging and placements within a CMS simulation. This allows the CMS to run over multiple dredging cycles and includes the morphological feedback that dredging produces on the morphology change. The implementation procedure for dredging operations was described, and an example simulation for conditions at St. Marys Entrance Channel, FL, has been provided to demonstrate the setup and results. Future enhancements to the DM include the representation of nonuniform sediments, spatially variable placement thicknesses or depths, and a user-friendly interface within the SMS.

This CHETN was prepared as part of the CMS work unit of the USACE CIRP. The technical note was reviewed by the CIRP program manager Dr. Julie D. Rosati and by Dr. Honghai Li. Sincere appreciation is expres sed for their review comments and suggestions, which improved the content and clarity of this document. Files for the study may be obtained by contacting the authors.