Difference between revisions of "Publications:Newsletters/Apr2013" 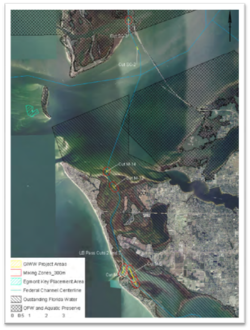 From 14-18 March, as part of a collaborative initiative across three navigation research programs, CHL, EL, and researchers from the University of South Florida conducted a field study on the turbidity, dispersion, and sedimentologic characteristics of dredge and nearshore placement plumes at the mouth of Tampa Bay, FL. The study’s objective was to evaluate the loss of fine sediments from the source within the Gulf Intracoastal Waterway (GIWW) to the sink, a nearshore placement area offshore of Egmont Key, and to determine the temporal and spatial fingerprint of dredging and placement plumes with respect to cultural and ecological resources such as submerged aquatic vegetation. Study findings will assist the Corps’ Jacksonville District in future permitting efforts utilizing the Corps’ new hopper dredge, the Murden, for nearshore placement of sediments with higher concentrations of fine material. This study was supported by the Coastal Inlets Research (CIRP), Dredging Operations and Environmental Research (DOER), and Regional Sediment Management (RSM) programs. Study technical leads are Tanya Beck, Coraggio Maglio, and Dr. Joseph Gailani.

The annual Navigation Research Area Review Group (RARG) meeting was held at Mobile District offices 26-28 Mar. This year RARG attendance was very limited, but the CIRP presentation can be downloaded from the CIRP website under "Tech Transfer -> Meetings -> RARG2013." The RARG annually reviews research efforts and prioritizes statements of need (SoNs) submitted by non-ERDC USACE personnel through the Navigation Gateway (http://operations.usace.army.mil/navigation.cfm). Navigation RD&T program managers presented their work to date in an overview of the past year and identified work planned for this year and next. Forty-three SoNs submitted in the past year were presented and discussed, and previously unfunded SoNs were reviewed. The RARG was shown four technology demonstrations that Mobile District presented using ERDC products from the Navigation RD&T portfolio. At the end of the two-day meeting, the RARG ranked the cumulative list of SoNs to identify priorities for new work to begin in FY14 (rankings to be announced).

One of CIRP's Principal Investigators, Alex Sanchez, has been working on obtaining his PhD from the University of Mississippi under the guidance of Dr. Weiming Wu, a collaborator with the CIRP on the Coastal Modeling System. Some of Dr. Wu's and Alex's recent contributions to the CIRP can be found on the CIRP website under "Publications -> Journal Articles and Book Chapters." Defense of the prospectus at the University of Mississippi is conducted after the topic has been proven and thus represents a good advancement towards obtaining the PhD degree. Alex's topic is "An Implicit Finite-Volume Depth-Integrated Model for Coastal Hydrodynamics and Multiple-Sized Sediment Transport." Congratulations, Alex!

Researchers from CHL's Regional Sediment Management, Coastal Inlets Research Program, and Dredging Operations and Environmental Research Programs met with the Jacksonville District (CESAJ) and Florida and Federal permitting agencies on February 13th, 2013, to discuss present and future research needs related to the placement of mixed sediments in the form of a nearshore berm. Part of the discussion covered the state of the science around nearshore berm design. Researchers and scientists from Florida's Department of Environmental Protection, Fish & Wildlife Conservation Commission, the U.S. Fish and Wildlife Service, NOAA's National Marine Fisheries Service, and other local stakeholders participated and expressed their research questions and ideas for future collaboration across multiple scientific fields. This is the first in a series of meetings that the Jacksonville District intends to have to facilitate a regional stakeholder partnership on a specific practice of the USACE. 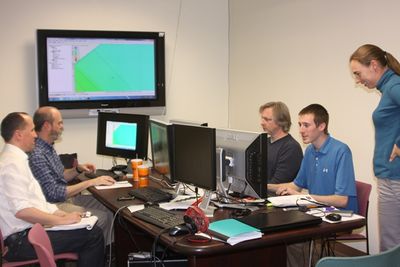 In response to a Dredging Operation Technical Support (DOTS) request, Mitch Brown and Ashley Frey provided training of a number of CHL models and tools developed through the Coastal Inlets Research Program (CIRP) to employees at the Baltimore District on 2-4 April. NAB staff in attendance were: Justin Callahan, Joe Reed, Tom Laczo, and Trevor Cyran. Mitch gave two days of hands-on training for the Coastal Modeling System (CMS). There was much interest in the use of nested grids on the Poplar Island Expansion project, a dredged material placement site in Chesapeake Bay. Additionally, use of the CMS and other tools for a project at Stinky Beach, Ocean City Inlet was discussed. On 3 April, Ashley taught RMAP, SBAS, and GenCade. RMAP (Regional Morphology Analysis Package) analyzes profiles and shorelines through a series of calculators while SBAS (Sediment Budget Analysis System) is a tool which calculates sediment budgets at inlets and the adjacent beaches. The purpose of the RMAP and SBAS training was to give the Baltimore District tools for developing a sediment budget near Ocean City Inlet. The District also asked for a short presentation and demonstration of the new shoreline change and sand transport model, GenCade.

Entrance Design for Reducing Impact of Waves and Flow on Wetlands at Braddock Bay, NY 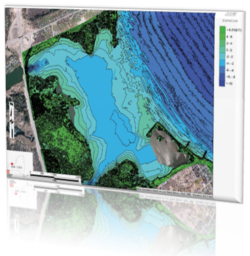 Braddock Bay is a shallow, open-inlet estuary located northwest of Rochester, NY, on the south shore of Lake Ontario. The natural barrier bars at the Bay entrance have gradually eroded away since the early 1900s. Continued erosion of the barrier bars has increased wave action in the Bay, leading to major loss of wetlands inside the Bay. CHL and EL researchers are teaming with the Buffalo District to conduct numerical wave, hydrodynamic, and sediment transport modeling to investigate structural systems for reducing waves, flow, and sediment transport patterns in the Bay. The study includes the existing condition and structural alternatives to evaluate potential shoaling at the Bay entrance, sedimentation within the Bay, and wetland erosion at the Bay.

A Structural Design Study for Reduction of Waves and Channel Sedimentation at Tangier Island, VA 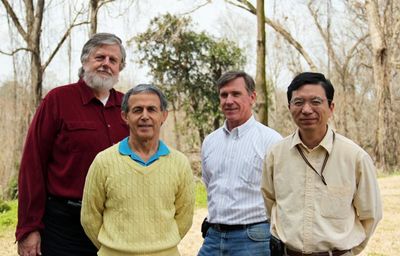 CHL is performing a numerical modeling study to assist the Norfolk District to investigate waves and hydrodynamics in support of District’s structure design to reduce wave energy entering the western end of the Tangier Island, VA, channel and boat basin. Existing and different structural alternatives are being investigated, including design estimates for sizing the rock material. The modeling will also investigate channel sedimentation and channel infilling rates under strong wind and wave conditions. The results of the hydrodynamic modeling will feed directly into a preliminary wave control structure design. Structural stability, runup/overtopping, and transmission will be considered in the design calculations.