Difference between revisions of "TR-08-13:Chapter3"

Demirbilek et al. (2007) described the computer graphical interface in the SMS (Zundel 2006) for CMS-Wave applications. A summary of key features of the interface is provided in this chapter to familiarize users with guidelines for the interface usage and implementation of CMS-Wave. The SMS is a graphically interactive computer program designed to facilitate the operation of numerical models and creates input files and output visualization for CMS-Wave. The CMS-Wave interface in the SMS is similar to that of the half-plane model of STWAVE Version 5.4 (Smith 2001b). The SMS can generate CMS grids with variable rectangle cells and half-plane STWAVE grids with constant square cells. Both wave models can use the same grid domain with identical grid orientation and layout, and the same file formats for their bathymetric and spectral energy files. This was done to facilitate the usage of CMS-Wave and allow users to utilize the same settings and files to run both models without modifications.

Depending on which options are selected in the *.std file, CMS-Wave may generate one to six output files. A wave field conditions file (*.wav) is always generated. Optional output files are calculated spectra (*.obs) and wave parameters with the maximum water level (selhts.out) at selected cells, wave breaking indices (*.brk), wave radiation stress gradients (*.rad), wave setup and maximum water level field (setup.wav), and nesting spectral data (*.nst). Figure 1 shows a chart of input and output files involved in a CMS-Wave simulation. Table 1 presents a list of the type and use of all I/O files, where "projname" is a prefix given by users.

The simulation file (*.sim) stores the coordinates of the origin and orientation of the computational grid, and a list of names of all files used in the simulation. All input and output files, required and optional, are listed in Figure 1 and is described in Table 1. Abbreviated output from sample files was provided in Technical Note ERDC/CHL CHETN-I-74 (Demirbilek et al. 2007) and presented in Appendix A to familiarize users with these files. 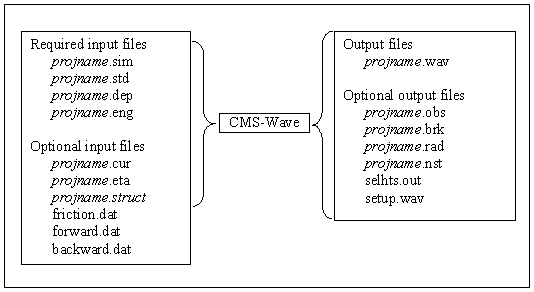 Users can run CMS-Wave with the input files of STWAVE Version 5.4 without making changes. In this case, CMS-Wave runs in a basic mode. Although doing this may be useful in some project applications, the basic mode does not take advantage of certain features of CMS-Wave, such as reflection. Users should run CMS-Wave with its special set of parameters as defined in the *.std file. That is, one can edit *.std, without modifying *.sim and *.dep, to add a few additional parameters that are specific to CMS-Wave. Guidance on various parameters and recommended values is given below.

Users can assign 0 for 15 control parameters in CMS-Wave to run in the basic mode. If only the first six parameters, iprp, icur, ibrk, irs, kout, and ibnd, are provided (minimum requirement) in *.std, a zero will be assigned to the remaining parameters, except that a default value of 1.0 is assigned to the diffraction intensity factor (akap = 1.0) to simulate a weak diffraction condition. If only the first ten parameters, iprp, icur, ibrk, irs, kout, ibnd, iwet, ibf, iark, and iarkr, are provided in *.std (no other information provided for the bottom friction and reflection coefficients), default values of bf = 0.0, ark = 0.5 (for 50 percent energy forward reflection), arkr = 0.3 (for 30 percent backward energy reflection), and akap = 1.0 are used by the model.

CMS-Wave calculates wave transmission, wave runup, and overtopping as special features on selected cells. These cells can represent a floating breakwater, a bottom mound breakwater, a beach segment and the land adjacent to it, jetties, seawalls, or underwater features such as reefs or submerged structures. A trench, submerged mound, or structure can be added to the bed as features without modifying the input depth file. These feature cells need to be specified in the *.struct file. Each feature cell is described by four parameters, istruc, jstruc, kstruc, and cstruc in a line format in the *.struct.

The interface for CMS-Wave is designed for the half-plane, i.e., 180-deg sector where waves propagate from offshore toward the shoreline. Similar to other finite-difference models available in the SMS, CMS-Wave is controlled through the 2D Cartesian Grid Module

. The user should select the Set Current Model command in the Edit menu and choose CMS-Wave to activate the model interface. After CMS-Wave is selected as the active model, its menu and tools become available. It is recommended that users become familiar with other modules of the SMS to fully exploit the complete utility of the interface. For example, the CMS-Wave grid can also be generated in the Map Module

under the CMS-Wave coverage. Likewise, users can select the Scatter Module

to import survey data and digital maps to define the bathymetry for the model’s grids.

The CMS-Wave menu (Figure 2) commands are listed in Table 2, together with a description of each command. 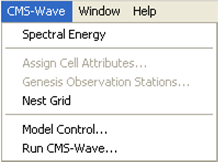 The most frequently applied CMS-Wave tools in the SMS are listed in Table 3, together with their icon and functionality. Only one tool can be selected (active) at a time. The active tool may be a model-specific tool such as those listed in the table, or it may be a general tool such as Pan, Zoom, or Rotate. The active tool controls which response the program will make if the user clicks or drags the mouse through the graphics window. Typically, there are two types of tools, those that are designed to select entities and those that are designed to create entities. In the CMS-Wave interface, the user can create a grid and may want to select certain cells. Multiple grid entities can be selected using the tools for selecting columns or rows by dragging a box or polygon around more that one entity, or by holding down the SHIFT key while sequentially clicking on entities.

The process for creating a CMS-Wave grid consists of four steps: 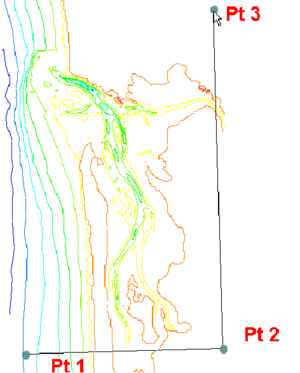 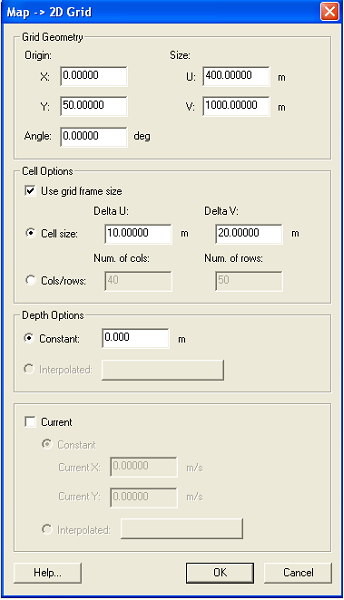 In the lower section of this dialog, users tell the SMS to interpolate the bathymetry values for the grid from the data resident in the Scatter Module. If a scattered data set with a vector functional data set exists in the SMS at the time the grid is created, there is also an option to interpolate current data to the grid. Once this data set is entered, the user clicks the OK button, and a grid is created. Bathymetry values for each cell of the grid, along with values of the horizontal current, are interpolated from the scattered bathymetry data at the centroid of the cells. Grid cells with a negative depth value are classified as dry land and are excluded in the CMS-Wave calculations. After the grid is created, the user can select cells and modify depth values and cell classifications (type).

Cell depths and attributes in the CMS-Wave grid may be edited, but the grid itself cannot be repositioned. To reposition or change the resolution of a grid, a new grid must be created. This is required if the domain needs to be enlarged or reduced, the grid cell size modified, or the grid orientation adjusted to align it better with the principal wave direction. Various other types of operation are permitted for editing CMS-Wave grid cells, including the following:

The SMS interface for CMS-Wave allows for the monitoring of certain cells in the computational domain. To do this, users simply select the cells, as described above in the section on editing the grid, and assign the cell to be a monitoring station (Figure 5). For each monitoring station, CMS-Wave saves the entire (half-plane directional) spectrum in the *.obs output file. 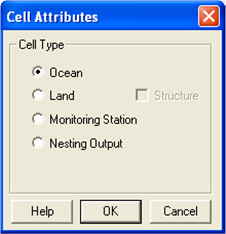 Incident wave conditions for CMS-Wave consist of specifying an energy spectrum at the model’s open boundaries. This requires users to define an input wave spectrum for driving the model. The input spectrum (or spectra for multiple wave conditions) may be generated from an external source such as the National Data Buoy Center (http://www.ndbc.noaa.gov/) or the Coastal Data Information Program (http://cdip.ucsd.edu/) buoys and read in from an energy *.eng file, or created using the spectral energy command in the CMS-Wave menu. This brings up the dialog shown in Figure 6.

In generating the wave spectrum, users first create a spectral grid. The Create Grid button allows users to specify the number, distribution of frequencies, and the directional bin size. As default, the model uses 5‑deg directional bins distributed over a half plane (Figure 6). Once the spectral grid is created, users can press the Generate Spectra button to generate spectra from user-specified spectral wave parameters. The types of parametric wave spectral forms supported are shown in Table 4. Parameters used to generate different wave spectrum types are stored in a tabular text file (*.txt) with the simulation for later reference. The Spectral Energy dialog allows the user to view the spectra in polar or rectilinear coordinates. It also allows the modeler to rotate the spectrum to view it in three dimensions. In the lower section, users can select either or both integrated frequency and directional plots of a generated spectrum. 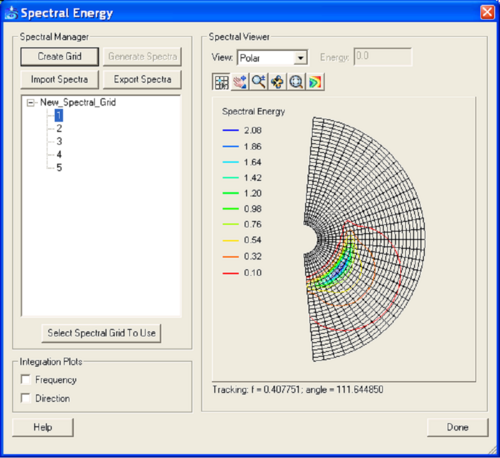 The Model Control command in the CMS-Wave menu can bring up the Model Control Dialog shown in Figure 7. This dialog displays the grid dimension and size at the top and model settings in the bottom. Because CMS-Wave runs in the metric system (m, m/sec), setting the Current Coordinates under the Edit menu to use ’Meter’ units (default in SMS10) for both vertical and horizontal coordinates is required. 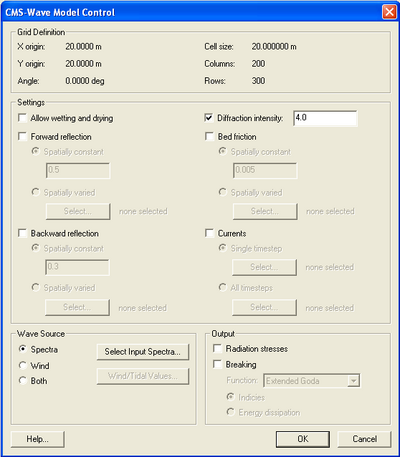 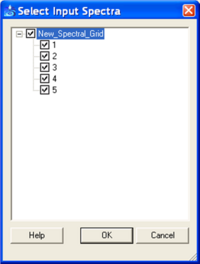 Reading the *.rad or *.cur file will create a vector data set of radiation stress gradients or currents in SMS. Reading the *.brk file will create either breaking indices (ibrk = 1) showing where the waves break or energy dissipation fluxes (ibrk = 2) in the model domain. Figure 9 shows an example project explorer in the left section of the SMS main dialog after reading in these solution files. 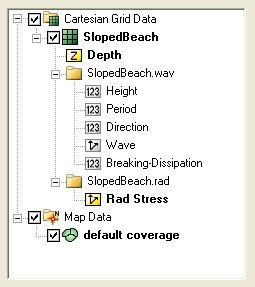 The SMS can display contours of the selected scalar or vector data sets for either input or output field data over the modeling domain. The *.obs file includes spectra computed by the model at the observation cells. These calculated spectra at the observation cells can be displayed and evaluated as the input spectra using the spectral energy dialog.