The Coastal Modeling System (CMS) is an integrated wave, current, sand transport, and morphology change numerical model within the Surface Water Modeling System (SMS) (Buttolph et al. 2006, Lin et al. 2008, CIRP 2010, and Wu et al. 2010). The CMS is designed for practical engineering calculations in the coastal zone, including coastal inlets, navigation channels, and adjacent beaches. Processes calculated within the CMS include tide, wind, and wave-driven currents. Forcing stresses caused by Coriolis, wind, bottom friction, and wave radiation are represented, as well as wave interaction with structures such as reflection, diffraction, refraction, transmission, runup, and overtopping. The CMS calculates coastal and inlet processes, sediment transport, and the resulting morphology change for simulation periods ranging from hours to months to up to a year (e.g., Beck and Kraus 2010).

The Shark River Inlet calculations were conducted for a 1-year simulation to determine future conditions of the navigation channel under different channel and structural configurations. The model was first calibrated for hydrodynamics, and then for sand transport and morphology change through comparison of pre- and post-dredging bathymetric surveys (conducted by the Corps of Engineers, New York District). For the Shark River application discussed herein, the total load non-equilibrium sediment transport model with Lund-CIRP transport equations were applied and used with the bed change equation to calculate the morphology change. The term "sand transport" is applied herein because the sediment size applied in this study was 0.26 mm sand (Beck and Kraus, 2010). Simulation results were both calibrated and validated based on short-term measurements of channel infilling, following the frequent 3-4 month channel surveys, and with model simulations extending to a year of calculations. The model was forced with the Sandy Hook NOAA tide gauge for water levels and currents, and offshore waves from Wave Information Study (WIS) Station 129 [USACE (2010) Wave Information Studies Project Documentation: WIS Hindcast Database. Developed by the US Corps of Engineer Research and Development Center. http://frf.usace.army.mil/wis2010] for 1994 were applied for wave-current interaction. 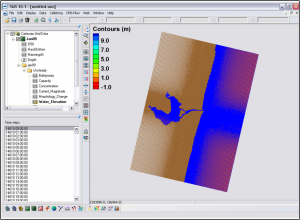 Defining Transect for Transport Calculations: This section details how to define a transect or Feature Arc in SMS for calculating transport rates. First, in the project explorer to the left of the SMS window, either change the type of Map coverage to Observation or create a new Map coverage of type Observation. Change the name of the Observation Map Coverage to SRI_Obs_Arcs.

a. To change the type of an existing Map coverage Right-click on the default coverage and select Type | Generic | Observation (Figure 2a); b. To create a new Map coverage, right-click on Map Data in the project explorer, then select New Coverage (Figure 2b).

Figure 3. a) Map Module icon in the Map Module toolbar. b) Creating a Feature Arc.

Create Ones Dataset: To integrate the time series of sand transport (a vector) across the Feature Arc, SMS requires a new dataset of the same size and length as the simulation, with constant value of one (named “Ones” Dataset). To create this dataset, select the Cartesian Grid Module (Figure 5a), and click on Data | Data Calculator (Figure 5b). 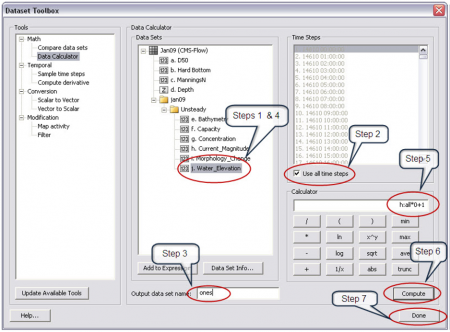 Within the Data Calculator window (Figure 6), select the Water_Elevation dataset to copy and create the Ones Dataset (Step 1). Click on the Use all time steps checkbox (Step 2) and change the name of the output dataset to Ones (Step 3). Double-click on the Water_Elevation dataset so that it appears in the Calculator window (Step 4). In the Calculator, multiply the dataset by zero and then add one (Step 5). Click on Compute (Step 6). The calculation might take a few minutes if the dataset is large. Once the calculation is completed, the output dataset will appear under the Datasets window. The new Ones Dataset will have the same length (duration) as the simulation, but will have values of one. Click on Done to exit the window (Step 7).

Figure 7. Opening the Plot Wizard via a) Display Menu, b) Icon. 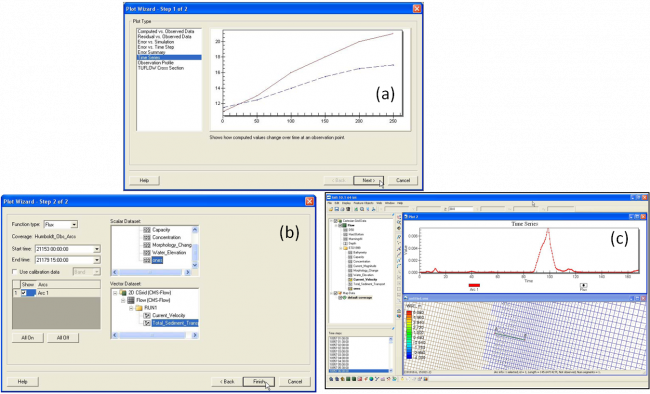 Figure 9. Selecting the View Values option after right-clicking on the time series window.

Calculating Sand Transport Statistics: There are two ways of calculating the sand transport statistics. One is with a Fortran executable, and the other is with an Excel spreadsheet. A simple Fortran executable is available from proc_flux files that calculates the transport statistics based on a time series of integrated (along arc) transport rates obtained in the previous section. The program can be run from a command prompt, a script file or by simply double clicking on the executable and providing the name of the input file. 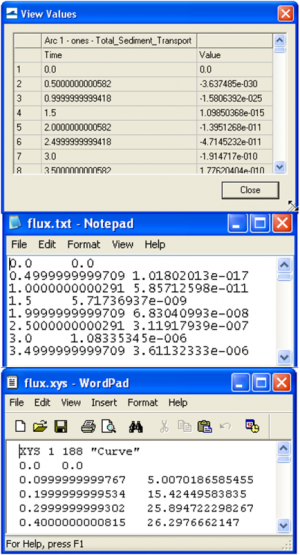 A table will be displayed with the time in hours and integrated sand transport rate across the feature arc (Figure 10a). From the Values window, select all the data and copy-paste it to a text editor such as Wordpad. Note the number of rows in the dataset by looking at the id number of the last row in the View Values window. Save the file with the extension *.txt (see Figure 10b). The data may also be saved as an *.xys file (SMS xy series file). In this case, the file needs a header as shown in Figure 10c, where the first line reads as shown and XYS is the type of file, 1 is the file ID, the next entry is the number of time steps, and the last entry is a name for the time series. Double click on the executable named proc_flux.exe (Figure 11). The executable does not need to be in the same folder as the input file. If the file is not in the same directory, the path should be specified before the file name. If the path contains spaces, quotation marks should be used. Press enter when the executable is finished. If no output file is specified, the default output file name is Flux_statistics.txt. Figure 12 shows an example output file. 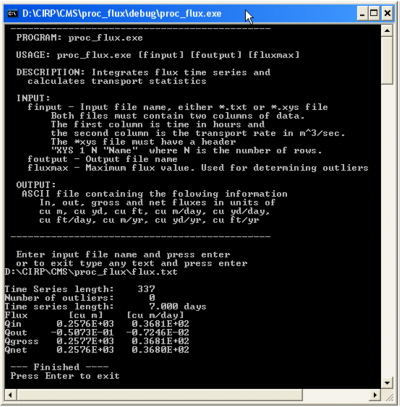 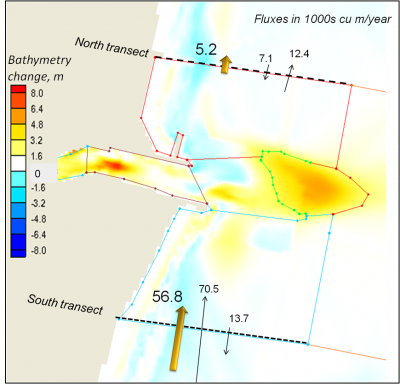 As discussed previously, transport arcs that extend through the surf and swash zones may be lower than realistic or measured rates because these processes are still being implemented in CMS. As shown for the Shark River Inlet application (Figure 13), net longshore transport was calculated as approximately 57,000 cu m/year to the north as measured on the south side of the inlet, which reduced to approximately 5,000 cu m/year on the north side of the inlet. Thus, within these transect arcs, the net effect of the inlet is to capture approximately 57,000-5,000 = 52,000 cu m/year. Thus, for this year of wave conditions, these calculations indicate that the ebb shoal, navigation channel, and adjacent beaches within these transect arcs would gain this much sand. Transport across additional arcs could be used to develop a "calculated" sediment budget.

This WN is Part 2 of a series discussing post-processing of Coastal Modeling System (CMS) simulations. Herein we presented a step-by-step method for integrating CMS calculations of sand transport across user-defined transects. Output files used in the examples are provided for download from Shark River Inlet Files and proc_flux files. With this method, the net and gross longshore sand transport rates for CMS simulations at selected transects can be integrated, compared with accepted values for the region, and used to compare to CMS output. Cross-shore transport rates can be calculated across additional transects such as an inlet channel or into an estuary to develop an understanding of the relative magnitude of sand sources and sinks. Results from these analyses can be applied to adjust CMS setup parameters such that bulk trends in sand transport that are calculated are representative of known or accepted rates.

This WN was prepared as part of the Coastal Inlets Research Program (CIRP) under the Inlet Engineering Toolbox work unit, and was written by Dr. Julie Dean Rosati (Julie.D.Rosati@usace.army.mil), Ms. Tanya Beck (Tanya.M.Beck@usace.army.mil), and Mr. Alejandro Sanchez (Alejandro.Sanchez@usace.army.mil ) of the U.S. Army Engineer Research and Development Center (ERDC), Coastal and Hydraulics Laboratory (CHL). The Shark River Inlet application used to illustrate the method was part of a study conducted for the USACE District, New York. Ashley Frey and Mitch Brown, Coastal Engineering Branch, CHL, reviewed this Wiki-TN. This Wiki-TN should be cited as follows: