The current CMS computational grid is a non-uniform Cartesian grid which is very easy to setup and offers some degree of refinement. In order to improve the refinement capability, a telescoping mesh will be introduced in SMS 11.0. The telescoping mesh, also referred to as quadtree mesh offers local mesh refinement for the least amount of effort (both computationally and grid generation). Local refinement is achieved by subdividing a rectangular cells into 4 cells. The quadtree mesh can be arranged as block-structured or completely unstructured. In this case it has been arranged as unstructured because it offers the most flexibility. Rectangular (or quadrilateral) meshes are more convenient for establishing high-order schemes and discretizing higher order spatial derivatives. The telescoping mesh offers most of the flexibility of the triangular unstructured mesh with the computational simplicity of the rectangular mesh. 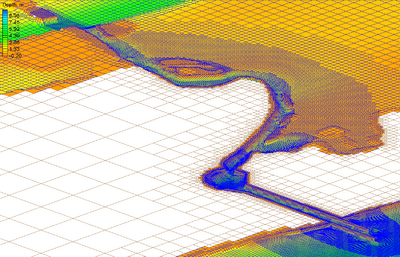 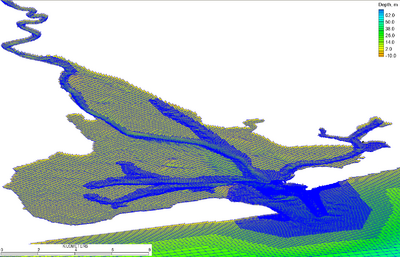 Instead of adding resolution with refine points, building a telescoping grid uses polygons. The idea is to define areas that need extra resolution inside connected feature arcs. Once the arcs have been created, then convert the arcs over to polygons (Feature | Build Polygons). Once built, the polygons can be selected and their attributes changed to reflect the desired telescoped cell size. See below. 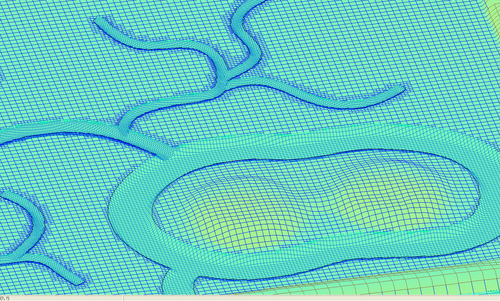 a. Build Grid Frame from CMS-Flow coverage - animation
b. Create a series of feature arcs to define the zones of increased resolution either manually or automatically
c. Convert Feature Arcs to Feature Polygons to assign resolution values - animation