The sand bypassing algorithm within GenCade requires a depth of active longshore transport,

, which is defined as the depth of breaking of the highest one tenth waves at the updrift side of the structure. Under standard assumptions, this depth is related to the significant wave height

(meters). This is used throughout as:

where 1.27 is the conversion factor between the highest one-tenth wave height and the significant wave height,

is the breaking wave height, and

is the breaker index. The depth of longshore transport is typically much less than the depth of closure, except under extreme wave conditions.

The characteristic maximum depth of longshore transport is

is used to calculate the average beach slope

, also used in Sand Transport Rates). It is calculated as introduced in Hallermeier (1983):

is the significant wave height (meters) and

is the wavelength (meters), both in deep water.

is calculated at each time step using the deep water wave data, making the assumption that it is valid across the entire longshore extent of the modeled reach.

A profile shape must be specified to determine the location of the breaking waves alongshore and calculate the average nearshore bottom slope used in the longshore transport equation. Thus, the equilibrium profile shape introduced by Bruun (1954) and Dean (1977) is used as such:

is the water depth (meters),

is the distance from the shoreline (meters), and

, in millimeters) which in turn effects the velocity (

If beach survey profiles for the target beach are available, it is recommended that the modeler use the curves in Figure 1 below (1a for metric units or 1b for American customary units) as templates to determine an 'effective' median grain size. The 'effective' grain size, if supplied to GenCade, will produce an A-value that will give the most representative profile shape. If profile survey data are lacking, the median grain size of the surf zone sand should be used. Table 1 is based on the methodology proposed in Moore (1982) and shows a summary of recommended A-values for grain size diameters. 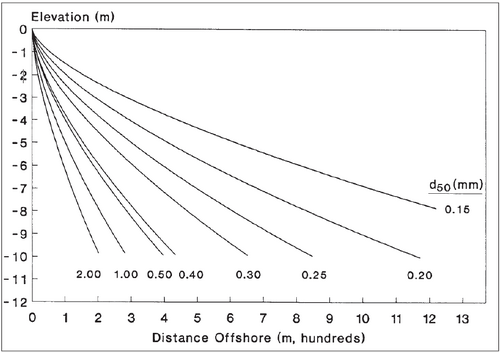 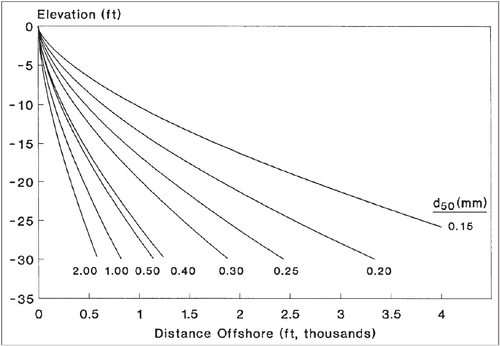 The depth of closure,

, the seaward limit beyond which the profile does not exhibit significant change in depth, must be specified by the user. Empirically, the location of the closure depth,

, cannot be identified with confidence, as small bathymetric change in deeper water is extremely difficult to measure. This situation usually results in a depth of closure located somewhere in a wide range of values, requiring judgment to be exercised to specify a single value. Often profile surveys are not available to a sufficient depth and with sufficient vertical and horizontal control to allow comparisons of profiles to be made.