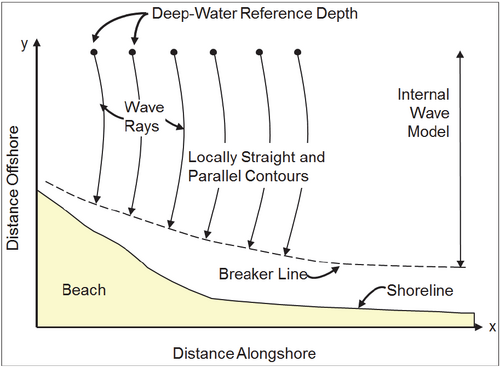 The internal model is applicable to a sea bottom with approximately straight and parallel contours, and breaker height and angle are calculated at grid points alongshore starting from the reference depth of the offshore wave input (Figure 1a). If an external wave model is used (Figure 1b), it calculates wave transformation over the actual (irregular) bathymetry starting at the offshore reference depth. Resultant values of wave height and direction at depths alongshore for which wave breaking has not yet occurred are placed in a file (by the modeler) for input to the internal wave model. These depths, taken, for example, as the depths in each wave calculation cell immediately outside the 6-m (20-ft) contour, define a “nearshore reference line,” from which the internal wave model in GenCade takes over grid cell by grid cell to bring the waves to the breaking point. If structures which produce diffraction are located in the modeling reach, the internal model will automatically include the effect of diffraction in the process of determining breaking wave characteristics.