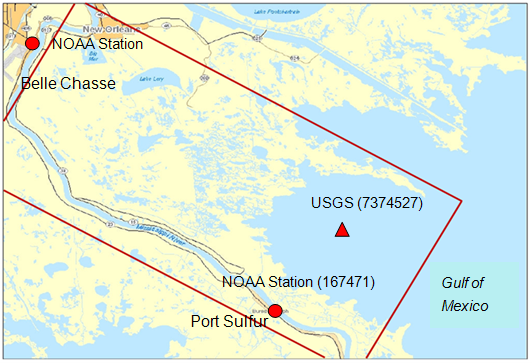 Located southeast of New Orleans on the coast of Louisiana, the White Ditch area has been experiencing the shortage of fresh water, sediments and nutrients from the Mississippi River, and saltwater intrusion due to sea level rise and storms. As a result, extensive wetland loss and degradation of tidal marshes have occurred in the area through the years. A hydrodynamic and salinity modeling analysis was conducted by URS (2010) to evaluate alternative designs for a fresh water diversion from the Mississippi River to the project area.

The CMS was driven by the tide data downloaded from U.S. Geological Survey (USGS) station (7374527) (Figure 11), Northeast Bay Gardene near Point-A-LA-Hache, LA (http://waterdata.usgs.gov/nwis). Rainfall data were obtained from the NOAA Port Sulfer Station (167471) and from a Belle Chasse station. Daily evaporation data were not available at the project area. Evaporation rates specified in the CMS were based on a study conducted by Cooke et al. (2008). Freshwater flows were measured from the Caernarvon Diversion and the Mississippi River. The New Orleans District, USACE, manages the Caernarvon Freshwater Diversion Project and provided daily flow information for the study. 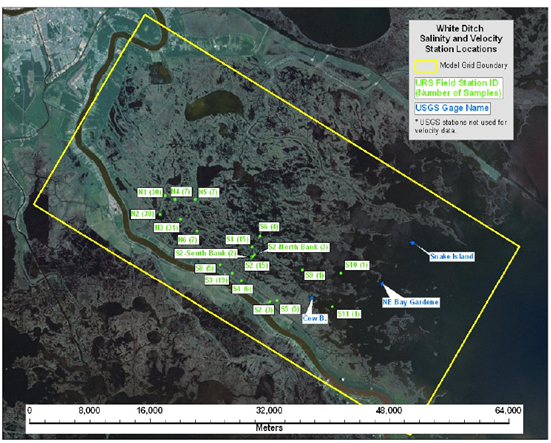 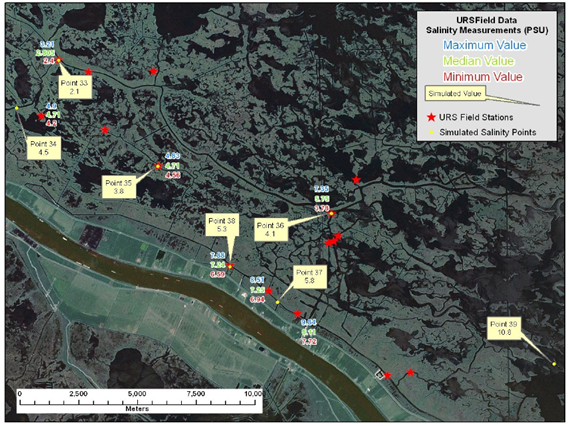 Statistical analysis of the salinity data was performed to compute the median, maximum and minimum salinity at each station. The time-averaged salinity values over the last four days of the CMS simulation corresponding to the time period of the measurements by URS (2010), were compared with the measurements (Figure 13).

The time- and depth-averaged salinity in this wetland area ranges from about 3 to 10 ppt. The variability of salinity is less than 1 ppt at the landward stations (Points 33-35) and can reach as high as more than 3 ppt at the seaward stations (Point 36) over the 4-day survey period. The salinity data show a general trend in the survey area. Salinity is relatively high at the southeast corner of the CMS domain in nearshore waters of the Gulf of Mexico, and decreases towards the northwest. High salinity also occurs along the east bank of the Mississippi River and decreases to the northeast of the CMS domain. The general trend indicates that significant sources of freshwater in the White Ditch area are from the Caernarvon Diversion. CMS-Flow tends to underestimate the salinity at some stations, but overall the CMS results show good agreement between measurements and calculated salinity, and well represent the spatial pattern and temporally averaged salinity levels.

The White Ditch example provides an estuarine application of salinity calculations and verification for the CMS results, which well reproduce the spatial salinity distributions in the wetland area. Due to lack of measurements such as rainfall and evaporation, detailed bathymetry and salinity data, some assumptions were made for the study. Further improvement can be made as more data are collected in the future.