Standing wave in a rectangular basin

Assuming no Coriolis, bottom friction, advection, diffusion, and that the water elevation is much smaller than the water depth, the governing equations are given by

Given a closed rectangular basin of length

, the following solution can be found for simple harmonic motion (Lamb 1945)

is the wave number (eigenvalue), with

is the wave frequency, and

is the wave (eigen) period given by

The temporal tem is approximated by

is a weighting factor between 0 and 1. For

= 0, the scheme reduces to the first-order backward Euler scheme, and with

= 1, the scheme reduces to the second-order backward scheme (Ferziger and Peric 1997).

The model setup is summarized in Table 1.

Table 1. Summary of the model setup for the standing wave test case. 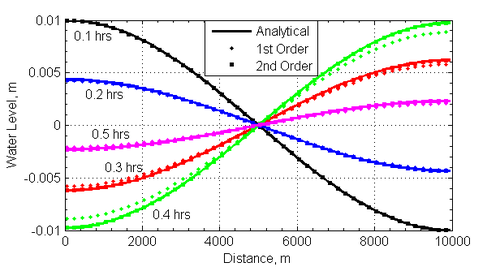 In order to demonstrate the low dissipation of the second order scheme, a snap shot of the water levels after approximately 16 and 16.5 wave cycles is shown for the second order temporal scheme in Figure 3.

Table 2. Goodness-of-fit statistics* for standing wave test case for the 1st and 2nd order temporal schemes. The normalization was done with the wave amplitude = 1 cm.