In 1991, Visser conducted eight laboratory experiments of monochromatic wave on a planar beach and collected measurements on waves, currents and water levels. The bathymetry consisted of a 1:10 slope for the first 1-m seaward distance, a 1:20 slope for the next 5-m distance, followed by a 5.9 m distance of flat bottom to the wave generator. Both experiments had incident wave heights of 0.078 m, peak periods of 1.02 sec and an incident wave angle of 15.4°. Experiment 4 was run over a concrete bed and experiment 7 was run of a thin 0.005-0.01 m layer of gravel grouted on the concrete floor. 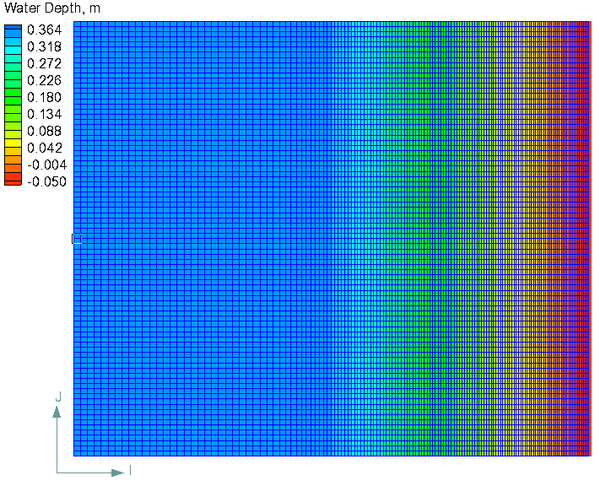 The computational grid (shown in Figure 1) consists of 84 rows and 147 columns with a constant grid resolution in the longshore direction of 0.15 and a variable grid resolution between 0.04 and 0.15 m in the cross-shore direction. A zero water level was forced at the offshore boundary. A summary of some of the simulation settings used for both experiment cases are shown in the tables below.

. The flow was then calibrated using the Manning's n coefficient and roller efficiency coefficient. The combined wave-current bottom friction was calculated based on Fredsoe 1984. Although this is not the default in CMS, it was choosen because of its strong theoritical backgroud compared to the default quadratic formula. Additional tests were run for comparison with the same settings except the roller model was turned off. 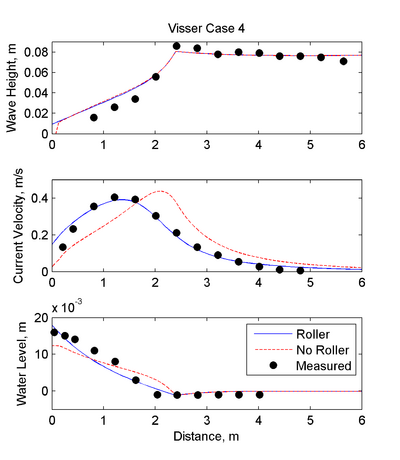 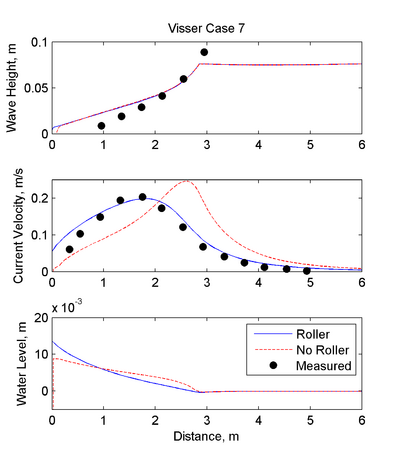 Figure 2. Comparison of measured wave height and longshore currents for Visser Case 7 (Note: No water level measurements are available for this case).