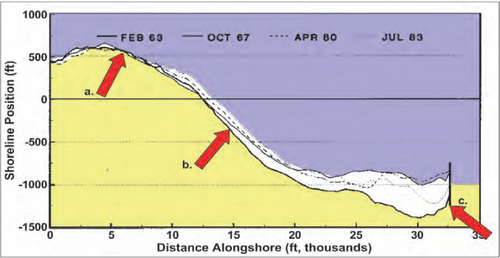 Figure 1. Measured shorelines at Anaheim Beach, CA, where arrows indicate possible boundary condition positions. (A) Pinned beach, all shorelines fall on top of each other at this point (B) Beach moving at a constant rate, near equal distance between consecutive shorelines (C) Gated Beach, presence of groin/jetty

It is helpful to draw all available measured shoreline position surveys on the same plot to determine locations along a beach that might be used as model boundaries. In doing so, it is sometimes possible to find a portion of the beach distant from the project that does not move appreciably in time, as shown in Figure 6 for a sandy beach or for regions with a hardened shoreline. By locating the model boundary at such a section, the modeled lateral boundary shoreline coordinate can be said to be ‘pinned’. Expressed in terms of the transport rate, this means:

If a section of beach cannot be found to be represented by the pinned beach boundary condition, it might be possible to locate a section where the shoreline is moving with a constant rate of change

. In such a case, the boundary condition can be expressed as:

and q is a line source/sink.

Groins, jetties, shore-connected breakwaters, and headlands that interrupt, partially or completely, the movement of sand alongshore may be incorporated as a boundary condition if one is located on an end of the calculation grid. If located on the internal domain of the grid, these objects will act to constrain the transport rate and shoreline change that is automatically calculated by GenCade. The representation is the same for both cases, although it occurs in different places in the numerical solution scheme.

The effect of a groin, headland, or similar object located on the boundary is formulated in terms of the amount of sand that can pass the structure. Consideration must be given to sand entering and leaving the grid. For example, at a jetty located next to an inlet with a deeply dredged navigation channel, sand might move offshore of the jetty during times of high waves; in contrast, in the absence of shoals that might feed the beach, no sand is expected to cross the navigation channel and jetty to come onto the grid. The jetty/channel thus acts as a selective “gate,” allowing sand to move off but not onto the grid.

As stated in Structures in GenCade, bypassing around groins and jetties is controlled by the ratio

is the length of the groin,

is the virtual shoreline location (inside the inlet channel or just off the model grid), and

is the shoreline location just next to the structure. The default of the bypass coefficient is 1, but may be manually set to any value greater or equal to zero. If it is set to less than 1, less sediment will go into the inlet channel (if next to an inlet) or out of the model area (if next to the model boundary). In both situations the accumulation against the structure (

) will increase. For BC greater than 1, the opposite will happen. Thus, a constructive strategy could be to start with the default value BC = 1 and then increase or decrease BC depending on whether more or less accumulation is desired against the structure. 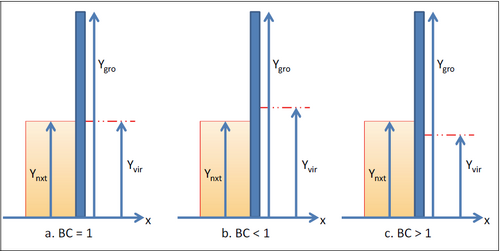 Figure 2. Schematics showing the Bypass Coefficient strategy depending on its value.